In TIGRESS experiments, most of the excited nuclei decay through the emission of gamma rays. But, for all the nuclear electromagnetic transitions that produce gamma rays, there’s a probability that they’ll occur through the emission of an internal conversion electron. In this case, rather than emitting a gamma ray, nuclear energy is transferred to an atomic electron, and the excited electron is ejected from the atomic system, an internal conversion electron.

Most importantly, one type of nuclear electromagnetic transition (E0 transitions) only occur through internal conversion electrons. This type of energetic conversion is invisible to TIGRESS, but in clear focus to SPICE.

Internal conversion electrons are particularly important for elucidating the quantum mechanics of nuclear shape co-existence close to the nuclear ground state mentioned in the TIGRESS section. If the first excited state is the shape-coexisting state, then the only allowed transition is the E0 transition. Quantum mechanically, there is mixing of the wave functions of these different shapes. The E0 transition is strongest when the shapes are very different and the wave functions are highly mixed

Thus, SPICE is essential for identifying the diversity and dynamics of nuclei particularly at and near closed shells where spherical and deformed shapes correspond to energetically competing configurations. 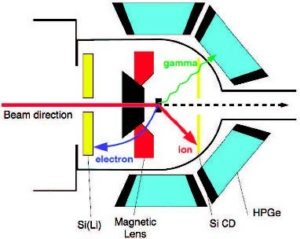 SPICE’s 10 cm diameter silicon detector is located 11.5 cm upstream of the target and, like a donut, has a one-centimeter hole in its the centre through which TIGRESS’ incoming heavy ion beam travels. SPICE’s powerful rare-earth magnet acts as a magnetic off ramp, collecting and diverting the electrons scattered from the target backwards to the detector.

The SPICE silicon detector is also sensitive to x-rays and gamma rays produced at the target, which would overwhelm the detector and obscure the conversion electron signals. SPICE includes a conical photon shield made of layers of tantalum steel, tin, and copper. This shield blocks photons produced at the target from view of the silicon, while the magnets steer conversion electrons around it.

SPICE was funded through a Canadian Foundation for Innovation grant through the University of Guelph. SPICE was designed and built at TRIUMF.