Ever since the invention of the microscope, scientists have been peering deeper and deeper into the world around us. During the past century, new and better techniques for looking inside materials have been found, including X-ray diffraction, electron microscopes and neutron scattering. Scientists at TRIUMF are using another technique to examine materials, called μSR (pronounced “mew-ess-are”), which has become a unique and powerful probe to peer into and gain a deeper understanding of what goes on inside materials like semiconductors, magnets and superconductors.

In the acronym μSR, the “μ” stands for “muon” (μ is the greek letter “mu”), “S” is for “spin”, and “R” can stand for a number of words, including but not limited to rotation, relaxation, resonance or research. The acronym is meant to draw attention to the analogy between μSR and the more commonly know techniques of NMR (nuclear magnetic resonance) and ESR (electron spin resonance). Whereas NMR utilizes the spins of ordinary atomic nuclei, μSR is a collection of methods that use the muon’s spin to examine structural and dynamical processes in bulk materials on an atomic scale.

As researchers develop new materials and new applications for existing materials, it’s necessary to understand and characterize materials’ atomic-level characteristics; as such, the broadest application of the μSR technique is as a magnetic probe. Beams of positive muons are created with their spins lined up in the same direction. When these beams are shot into a material, the muons’ spins precess (or wobble, like a top) around the local magnetic fields in the material. The unstable muons soon decay into positrons; since these antielectrons tend to be emitted in the direction of the muons’ spin, μSR scientists can examine how the internal magnetic fields of different materials have affected the muons’ spins by observing the directions in which the positrons are emitted.

With TRIUMF’s μSR facility, users bring their own research samples for characterization; usually new or rare materials, for example nanotextured metal alloys for magnets or superconductors.

A new, tunable quantum spin liquid offers next-generation technology promise: Research at CMMS has demonstrated that it's possible to tweak a magnetic materials' overall electron structure in a new way to create novel states that could have numerous technological applications, including for improved magnetic information storage. As reported in Physical Review Letters (2018), using TRIUMF's µSR probe it was discovered that a material's magnetic ground state can be tuned by changing its charge order. A quantum spin liquid (QSL) is a strange ground state of a magnetic material with long-range entanglement and emergent excitations. The usual ingredients required to make a QSL are small spins and competing interactions that create geometric frustration. CMMS added an additional ingredient to generate QSL physics: charge order. The materials Li2In1-xScxMo3O8 have an asymmetric lattice and the electrons are dilute, with only a third of the sites occupied. As the ratio of scandium (Sc) to indium (In) atoms in the material is altered, the lattice becomes more symmetric and the electrons form a particular “plaquette” charge order which generates more frustration and induces a new, tunable QSL ground state.

Volume-wise destruction of the antiferromagnetic Mott insulating state through quantum tuning: Mott insulators are materials that should conduct electricity under conventional band theories but are actually insulators due to electron–electron interactions. They have applications in thin-film magnetic heterostructures and high-temperature superconductivity. Published in Nature Communications (2016), the work presents µSR results from the CMMS combined with X-ray, neutron and µSR data from other laboratories in a study of metal-insulator transitions of prototypical Mott insulators. The composition of RENiO3 with various fractions of rare earths RE=La, Pr, Ni and Sm, provides a tuning parameter in the temperature-composition phase diagram, controlling a phase transition between an antiferromagnetic Mott insulating state and a paramagnetic metallic state, terminating in a quantum critical point at T=0. Being a sensitive probe of magnetism, µSR is the ideal tool to measure the magnetic field distribution, the magnetic volume fraction and excitations from the ordered magnetic ground state. This experiment produced evidence that the quantum phase transition (QPT) in RENiO3 is first order: the magnetically ordered volume fraction decreases continuously to zero at the QPT, while the ordered magnetic moment retains essentially its full value until it abruptly vanishes at the QPT. These results unambiguously demonstrate that the QPT in these materials proceeds in a distinctly first-order fashion. Studies of antiferromagnetic Mott insulators, as well as emergent quantum phenomena in other kinds of materials, are useful to elucidate both the system-specific and more universal roles of first-order behaviour in quantum phase evolution.

µSR is a much more sensitive variant of the better known nuclear magnetic resonance (NMR), one of the most important tools in science for characterizing substances. µSR uses beams of polarized, positive muons (μ is the Greek letter “mu”) that are implanted into a material coming to rest in the space between atoms. There, a muon’s spin is changed by the local magnetic environment.

The positive muons have a half-life of just two-millionths of a second and decay into positrons (anti-electrons) which are emitted in the direction of the muons’ spin. Since the implanted muons had a known polarization, by observing the directions in which the positrons are emitted scientists can determine how the internal magnetic fields have affected the muons’ spins and reconstruct these magnetic fields.

Muons can also be used to study chemical processes. A muon’s mass is about a one-ninth that of a proton and thus a positive muon behaves as a tiny version of a proton. When positive muons are implanted into a material they pick up an electron and form muonium (Mu), a variant of hydrogen. Chemists study the reactions of Mu with different chemicals and in different environments and also use Mu to create free radicals and study the structure, motion and reactivity of these short-lived and highly reactive compounds. Using Mu, chemists are looking at a range of questions from fundamental ones about how mass affects reactions rates to more applied ones such as how antioxidants scavenge the free radicals that are responsible for diseases and aging.

The μSR facility consists of two main components: the muon beamlines; and the muon spectrometers and associated cryogenic and heating units.

In the Earth’s upper atmosphere muons are naturally created by the interaction of cosmic rays with gas molecules. At TRIUMF, a muon beam is created by firing 500 MeV protons into a graphite target to produce positive and negative pions. The pions decay in about 26 billionths of a second into a muon and a muon neutrino. The positive pions all decay into positive muons that are spin-polarized, all muon spins are pointing in the same direction. The level of spin polarization is much higher than conventional magnetic resonance techniques and is a main reason that μSR is more than a billion times more sensitive than NMR. 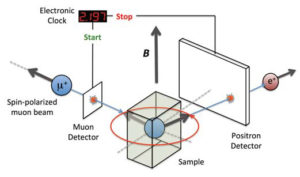 Presently, muons are supplied to experiments via two muon beamlines, M15 and M20. In 2019 two additional beamlines will be added: one supplying higher energy muons for experiments at high pressures, low temperatures and in strong magnetic fields; and the other specialized for full-support, fast-turn-around experiments for users new to μSR in which CMMS staff will provide full support from experimental design, running the experiment, analysis of the data and writing up the results.

The test sample is placed in the centre of a muon spectrometer surrounded by a magnet. An incoming muon passes through a muon counter, which starts a fast-electronic clock that is stopped by the detection of the corresponding decay positron. The muons are implanted about one millimetre into a sample with their spin either parallel or perpendicular to an external magnetic field created by a surrounding magnet.

μSR includes a suite of eight different spectrometers and related heating and cooling equipment that enables experiments to be conducted over an extremely wide range of temperatures, from just 0.015 oC above absolute zero (-273 oC) to more than 900 °C and over a wide range of magnetic strengths.

For example, the Helios spectrometer has a powerful superconducting magnet that creates a magnetic field up to six Tesla providing the ability to scan, or make step-wise, measurements of material properties over a wide range of magnetic field strengths. Alternately, the LAMPF spectrometer can operate with zero magnetic field, making it ideal for studying magnetic materials. The Dilution Refrigerator spectrometer operates at the very low temperatures required for the study of superconducting materials such as niobium. Each spectrometer has a distinct physical design and is supplied by one or more different cryostats or ovens for cooling or heating samples.